This is the first part of a series of 4 blog posts on the process I followed to discover two command injection vulnerabilities and a buffer overflow in TP-Link’s TL-WPA4220, a Powerline adapter and WiFi extender. In this post, however, we are not going to talk about the TL-WPA4220 at all, but we will be looking at a vulnerability affecting version 5 of the TL-WA850RE WiFi Range extender that was published a couple of years ago.

The main goal of this series is to provide a detailed description of how I started from understanding an exploit affecting a given device to later apply this knowledge to find similar vulnerabilities (that were not previously reported) in another device. I will try to provide many details so that it can be followed along by a wide audience, even if they have no prior experience analyzing firmware.

As we mentioned above, in this post we will focus on a particular vulnerability affecting TP-Link’s WiFi Range extender TL-WA850RE. Why this device and this vulnerability? Well, mainly because when I first started to play with the TL-WPA4220 that I had just bought, I thought maybe there was already some vulnerability disclosed in the past. However, googling it did not bring up any result about this device, but it did return some results on the TL-WA850RE. Since it has similar functionality (in the end, it is also a WiFi extender) and also has an HTTP interface, I thought it would be interesting to give it a look before proceeding with the TL-WPA4220. And indeed, it was!

When examining already known vulnerabilities for which the exploit is public, we can start by looking carefully at the exploit code to get an idea of what it does and what vulnerability could be behind. In this case, the code is pretty easy to understand. We see the following:

That is, for the exploit to work, the parameter operation must have the value write and the parameter option the value connect. Moreover, it seems pretty clear that the vulnerable parameter is wps_setup_pin, since the value contains a PIN number followed by a semi-colon and a command that spawns the telnet daemon. Also, that makes us think that when the device receives such a request, it will take the value of the wps_setup_pin parameter and pass it as an argument to a system utility without escaping or sanitizing it. The command shell will interpret the semi-colon as a separator between two commands, so it will execute the second part as an independent command, allowing the attacker to spawn the telnet daemon, for example. In other words, it looks like we are dealing with a command injection vulnerability.

Once we have a generic idea of what we might be dealing with, the next step is reverse-engineering the vulnerable binary and locating the vulnerability. Note that with the information that we have already gathered, the search can be narrowed down a lot. As a summary, here is what we know for now:

To obtain the httpd binary, first we should download a vulnerable version of the firmware. After extracting the contents of the ZIP file, we can extract the firmware with binwalk:

We see the Squashfs filesystem, which indicates that the operating system of the device is Linux. We can see its contents in the folder squashfs-root that has been extracted by binwalk. The httpd binary is in the directory squashfs-root/usr/bin, and we see that it is a MIPS executable:

After that, we can analyze httpd with Ghidra. Since the binary is stripped (like one would expect), most of the variables and functions will have meaningless names generated automatically by Ghidra. In the following, I have decided not to rename any of these variables and functions so that if the reader decides to analyze the binary with Ghidra themselves, they would see exactly the same as what is shown here. Note that there are some functions that do have meaningful names (such as httpWpsInit, execFormatCmd, etc.). These names have not been defined by me: these functions are exports of the binary, so this information is present in the binary itself.

Our first goal is to determine where the string /data/wps.setup.json is used. Since we know that this is the vulnerable endpoint, we want to know what parts of the code are executed when it is accessed. Then, we will start looking at these parts and from there we will try to track down the vulnerability. This is much more effective than trying to understand the whole binary, which would probably take us some days at least.

We can find the uses of this string by clicking on the Window menu, selecting “Defined Strings”, and writing it in the Filter textbox. Then we double-click on the result, and in the disassembly view we can search for the cross-references right-clicking on the variable (or simply pressing Ctrl+Shift+F). Doing that we see that this string is only referenced at the address 0x00429930, which is inside the function httpWpsInit. The decompilation of this function is:

We see that the function httpRpmConfAddAndRegisterFile is called, passing the endpoint as a parameter. The name of the function suggests that it is configuring how the HTTP server will respond when this endpoint is accessed. We can also see that the third parameter is a function (in our case, FUN_00429750), probably the function that will be called when this endpoint is accessed. Taking a look at FUN_00429750, we see the following (we show only an excerpt of the decompiled function): 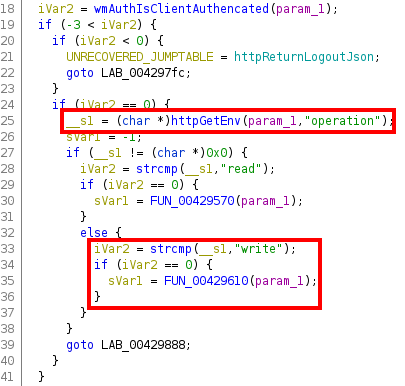 The httpGetEnv function seems to obtain the value of the specified HTTP parameter, in this case the parameter operation. This is stored in a variable that Ghidra names __s1, and then compared to the string write. If they are equal, the function FUN_00429610 will be called.

Recall that, in the exploit, the first parameter was precisely operation with the value write, so the execution flow of the exploit will go through this path. So let’s decompile the function FUN_00429610 and try to understand what it does: 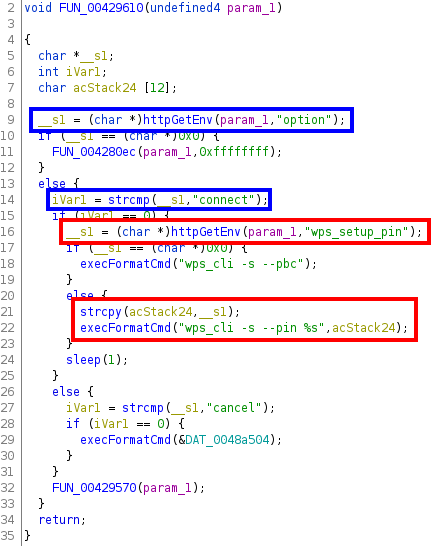 Here we can see the following:

From the name of this function and the first parameter (that contains the format string %s), we can infer that ultimately the following will be executed:

Let’s see if our instincts are correct!

A quick look at the function execFormatCmd seems to confirm our suspicions:

Indeed, we can see that this function calls vsprintf and stores the result in acStack268. With the above parameters this variable would have the following value:

as we guessed. This variable is then passed to FUN_0040b090, where presumably this will be executed. Looking at this function, the following part stands out:

First, we see that the function fork is called, creating a child process. This process, identified by the value of __pid being zero, constructs a null-terminated array of pointers to strings (starting at address local_2c). Indeed, looking at the information provided by Ghidra at the start of the function’s disassembly, we can see that although the variables local_2c, local_28, local_24 and local_20 seem independent, they are actually allocated contiguously in the stack (with four bytes of space for each one):

Also, inspecting the global variable DAT_0048a50c, we see that it is the string -c. Therefore, the variable stored at address local_2c can be “visualized” as the following array:

Note that here, local_18 is just the parameter passed to the function (in our case, the variable acStack268 described above). This array is then passed as the parameter argv of the function execve, which has /bin/sh as the first parameter. In other words, the following will be executed:

Note that the first element of the array (sh) corresponds to argv[0], which is simply the name of the executable and is not actually passed as an argument to /bin/sh.

It seems, thus, that we found the root of the issue. When we set local_18 to be:

the following will be executed:

As we mentioned above, the semi-colon is interpreted as a separator between two commands, so this is equivalent to executing:

Great! We successfully hunted down the vulnerability and completely understood why and how it could be exploited. In the subsequent posts, we will make use of this knowledge to find similar vulnerabilities in the TL-WPA4220 Powerline WiFi extender.

Before wrapping up, let’s take a moment to sum up what we have seen in this post. First of all, we started by looking at an exploit for TP-Link’s TL-WA850RE. The exploit was fairly easy to understand and gave us an idea of where the vulnerability could be (in the httpd binary, when a certain endpoint was called with specific POST parameters).

After that, we extracted the firmware with binwalk and proceeded to analyze the httpd binary. Our analysis was mainly guided by the information that we gathered from the exploit (looking only at the affected endpoint and following the path taking into account the POST parameters that the exploit passed). This allowed us to reach the root of the vulnerability, where we could see that a user-provided string was passed as part of a command executed using /bin/sh without any kind of escaping or sanitization. During this process, the decompilation done by Ghidra has been of great help, producing C-like code from the disassembly, which was really easy to analyze.

As we already mentioned, the goal of this post is not to present anything new (the vulnerability and exploit have been known for many years), but to take this previous knowledge and understand it completely, so that we can benefit from this learning. When we proceed to analyze the TL-WPA4220, a good starting point can be to look for similar vulnerabilities, since often the vendors reuse code and programming patterns. In particular, we can start by looking if the function execFormatCmd is also present and, if so, determine whether in any of its calls there is a user-supplied parameter. This would be a great candidate to find a command injection vulnerability like the one we have just seen.

If you are curious to see how this story continues, head to part two of this series!